“We have reached the tenth edition of the Trade Covered Cross. On Saturday 18 April, the street was filled with Cross Cover botiguesi businesses, organizations, groups, cooperativesi artists, to help the recovery of our local trade, which was the tenth Once this esrealitza Trade Show. During the day, there were many groups artístiquesi sports invited us from the stage of the fair. Among the dance groups, which became one of platsforts of the day, we had the dance school, the dream factory Sonia Alonso Ballet Company of Catalonia, and the Flemish school Raquel Alonso, and also we encourage you ballésforça among visitors, thanks to the music played for a while Jam Session Music School, which has opened new headquarters in the Fountain Quail. In addition, regarding the world of sports, we accompanied Section Karate Barcelona Swimming Club, who turned 35 years old, and Karate Federation of Catalonia, awards were given to the participants of the exhibition . At noon, the event was tenirlloc institutional Show, an event in which regidorsi Minister also Feliu de Lanús, he read part of the Manifesto Against laViolència prepared by Cross Coberta.També batucada was recórrertotl’eix trade throughout the day, as well as our mascotesNeti Nice. Among the activities that we could see the shaft was the demonstration of agility animal, historic buses, bus Jovi, one archers other activities.” 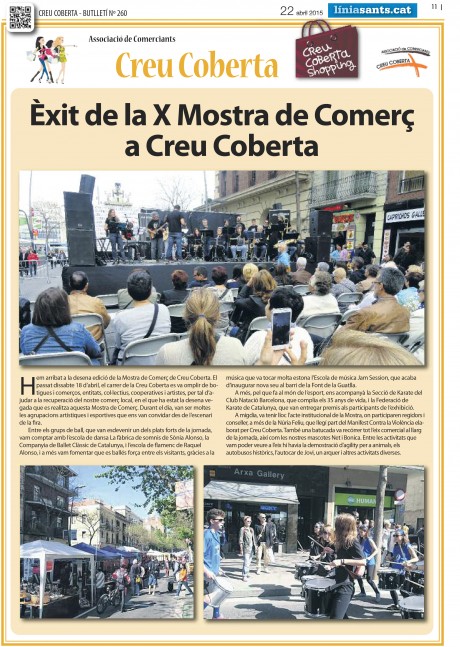 LOVESOUND.ES - FIRST HIGHER TITLE OF MUSIC WITH SPECIALIST IN SONOLOGY